The Hanwell Pro Flood Series of transmitters are used for water leak detection to alert users to potential leaks before damage can occur.

Click on the individual products below for more information.

The radio transmitters are connected to a highly responsive water leak detection cable. These cables can be run along key areas enabling rapid notification of water leakage before serious damage can be done. The flood cable consists of eight cores wrapped around a central strain relief plastic core to provide some rigidity. Of the eight cores, two are the conductors. These are uninsulated copper so, if the cable comes into contact with water, it will short and provide an alarm signal. The cable is sheathed in a black plastic overbraid to keep the cores in place and to prevent the conductors shorting on any metal surfaces the cable may run over.

The obvious inherent advantages of the water leak detection flood series are that the units offer low installation costs and a minimal wiring solution. Each sensor is either powered by its own internal battery or by an external 12V DC power supply. For a cost effective solution, the flood cable is connected to the wireless transmitter via an inline junction box using low-cost 2-core signal cable. The allows the transmitter to be located in a good radio position and avoids running the specialist cable down walls or along floors which do not require flood monitoring.

When the flood cable is shorted by water, the transmitter unit immediately sends a change of status signal six times to the receiving equipment. This multiple transmission is to ensure the signal is received straight away. Additionally, the Hanwell EMS system can also be fitted with an alarm relay which triggers, for example, an auto dialler, for out of hours instant notification. Another built-in feature of Hanwell EMS is the ability to send emails and SMS messages. For SMS additional hardware is required.

The GSM transmitters can be used with float switches to detect a risk of flood in remote locations with immediate SMS alerts. The flood series of radio transmitters have also been used to monitor water levels in outdoor and remote environments. The system can store up to eight telephone numbers for sending SMS messages. Once an alarm has been registered, the alarm message is sent to the first programmed number. If there is no response the other numbers are called in order until a response is received. The delay time for a response is user programmable. The alarm message contains alarm number, alarm information and site name.

All set up is done via USB interface using the simple setup program, which is supplied free. A heartbeat message can be programmed at user-defined intervals, low battery text message is sent on low battery. SIM card required.

This product is to be used in conjunction with the Hanwell EMS software for comprehensive centralised monitoring. 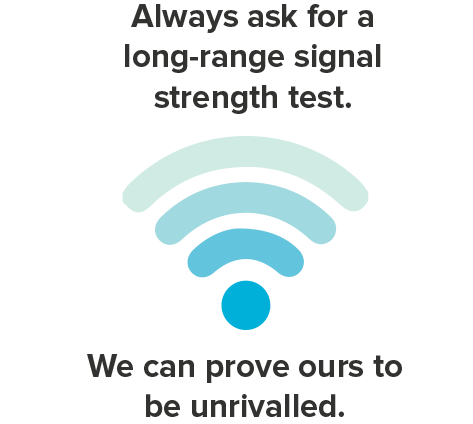 This product can be calibrated to your specifications, contact us for further details.
N.B Instrument operating range -20°C to +65°C in a non-condensing RH environment