…as part of the support package to the British GT Championship, over the weekend of 11th & 12th June. The TCR team with the 3 cars of Ian, Matt and Dan in the GT5 Challenge were entering the weekend with high hopes from early season testing at the circuit and strong performances in previous years races.

Ian and Dan started their testing on the Friday morning prior to the race weekend, with Matt joining in the afternoon having completed a couple of Biology GCSE exams in the morning!! This didn’t turn out to be the most productive test day with up to 60 cars on track ranging from complete beginners in road going versions of our Ginetta G40 cars right up to Pro drivers in the latest Porsche GT3, creating nearly 45 second differential between the fastest and slowest cars out on track. This resulted in very limited actual lap times as virtually every lap was effected by a slower or faster car, and to add to this we suffered at least one red flag per session

With some good sector times by Ian and Matt there was certainly some encouraging signs as to the potential performance and a last minute adjustment to the front suspension appeared to make significant improvements to turn in during the last session, so we were confident about qualifying on Saturday.

Saturday arrived and although overcast, it was still dry with just the occasional spit of rain in the air. With qualifying at 11:15am it should have been a fairly relaxing morning with just final preparation on the cars, however, a double check on the data the previous evening had shown Dan was down on power, reflected in his straight line speed, so all hands were working on finding the issue. With nothing obvious, the team decided to make a few changes and replace the Catalytic converter, to see if that made any difference.

The additional work to Dan’s car meant the cars were a little late heading down to the assembly area putting them towards the back of a 42 car grid. As they were released from the assembly area Ian and Matt had decided to try to work together to create some space and create a tow, this was quickly destroyed while making their way past the GRDC+ cars, with Ian following Matt through only to be turned in on by a GRDC+ car, causing Ian to spin. Luckily nothing hit and nothing damaged so both cars carried on separately.

It was Matt who set the early pace, posting a solid provisional pole time, while Ian was struggling to get space to set a time and at the midway point was only in 8th place. Matt was then knocked off Pole by Jonny Hadfield, but then went quicker still, only for his time to be disallowed due to exceeding the track limits, leaving him in second place. Ian then managed to find a bit of space and posted a time 1.5 seconds better than his previous time and moving him up to 3rd place right behind Matt, Ian’s best ever qualification. Dan had a strong qualifying session going quicker than he had at any time during testing, and despite being down on power still achieved 14th place.

The first of the three races for the GT5 Challenge for the weekend was schedule for the very last race on Saturday with a 17:45 start time. The weather was still overcast, but it looked like it should hold and remain dry. 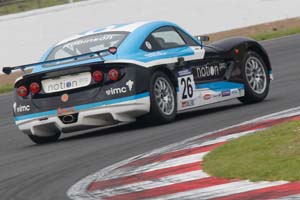 As they formed up on the grid with TCR taking up two of the top three positions, there was a lot of excitement for a good result. At the start it was Ian that got the better start following Jonny Hadfield into the first corner, with Matt just behind, but as they entered the Maggots complex both Jonny and Ian went in a little hot and pushed wide giving Matt the opportunity to get around the outside, into second and then the lead by the end of the straight. The lead three had managed to open up a good lead on the chasing pack by the time they had gone halfway round, but as they exited the Loop, Ian got the power down a little early with the tyres not fully up to temperature and ended up sliding off the track, dropping down to 6th place, while Matt and Jonny broke away. Ian was quickly back up into 5th as they went through the Maggots complex next time around and the leading 5 had a big gap back to the rest of the pack. A big crash behind them and a car stranded in the road brought out the safety car, bringing the pack back together, and more concerning for the leaders, Ollie Chadwick (championship leader) who had had to start at the back of the pack, up to 7th and right behind the leading group.

When the safety car went in Matt got a clean get away and the leading 5 created a small gap, but contact between Matt and Jonny, causing Matt to go off track bunched up the pack again and as they headed around Abbey heading for the Village hairpin they were two and three abreast, with Ollie on the inside of Ian. Ian managed to hold the outside line around Village giving him the inside line for the Loop. As they came up to the Loop Matt was fighting with Ryan Hadfield and in all the chaos Ian and Matt ended up making contact with Matt suffering the worst dropping to 14th, while Ian lost a number of places and was back in 6th. Over the remaining laps both Ian and Matt managed to gain back a few places, with Ian finishing 5th overall and taking the Am class win, while Matt recovered to 9th overall. Dan had enjoyed a good race moving up to 12th overall and taking 6th in the Am class.

In contrast to the opening day’s action, Sunday morning’s race took place in very wet conditions with Ian the highest placed of the TCR cars in fifth on the grid and Am class pole, with Matt back in 9th and Dan in 12th position. Ian got a good start, holding position through Copse and then moving up into 4th as a result of a spinner ahead and settled down into a good race pace just behind the lead three. 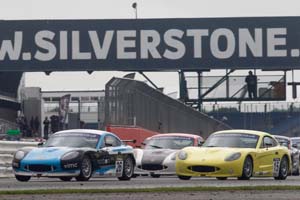 Matt, meanwhile, made good progress on the first lap jumping from 9th to move into seventh and then took sixth with a great pass at Brooklands. Reeling in Glen Broster and Ian ahead, Matt passed Glen on lap two at Club and then moved ahead of Ian into 4th on the third tour, setting the fastest lap of 2m 46.003 seconds. Taking Ian with him, Matt began to close in on the lead 3 and soon after a problem for Jonny Hadfield saw him drop behind Matt and Ian elevating them to 3rd and 4th respectively. But disappointment then for Ian as slight contact with Jonny as he made his way past caused Ian to spin and drop down to 10th place and 4th in class. A strong drive, showing pace similar to the lead pack, allowed him to catch and pass two of his Am class rivals eventually finishing 8th overall and second in class.

Back at the front, Matt held third before moving into second following a spin from a rival but the dramatic encounter then got more tense on the final lap when a backmarker threatened to delay Matt through Becketts. Although edged back to third into Stowe as a result, Matt pushed hard to try and regain second and finished just 0.143 seconds shy at the flag.

With the reverse grid for race 3 being pulled out as 10th place, Ian would again be the lead TCR driver starting 3rd on the grid, with Matt in 8th and Dan in 13th. However, things didn’t work out quite as hoped for the TCR team in race 3. Leading up to the race the weather appeared to be improving with the end of the British GT race ending on slicks just before the start of our race 3. Full of optimism the drivers headed down to assembly area on Slick tyres, but just as they arrived the rain started up again and you could see a noticeably dampening track. So it was another mad rush for the team to change the tyres over to wets, and also a damper adjustment to soften the car up. Then as the cars left the assembly area to work their way around for the green flag lap the rain stopped and the track dried very quickly. With the cars set too soft for the drier conditions the 3 drivers struggled with over heating tyres and the cars switching from under-steer to over-steer with no warning. 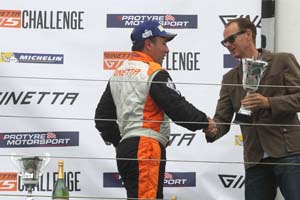 Ian was edged back to fifth on the run into Copse at the start of the race, before then running wide at Becketts that resulted in a slip to the tail end of the top 10. Matt managed to fair a little better moving ahead of Ian into ninth and although edged wide at Vale onto the damp, he still held his place. Matt then managed to progress into 8th on lap two and then into 7th a couple of laps later. Matt did make it up to 5th on the final lap, but due to an almighty thunderstorm and cars falling off everywhere a Red flag was shown bring the result back to the previous lap and dropping Matt to 7th.

Ian however benefited from the red flag having been pushed off at the Loop and relegated to 12th on the final lap; the red flag meant he was classified as 9th and second in class, where he had been a lap earlier. Dan ended the opening lap 6th in class and 14th overall and he managed to break into the top five in the Am class on the second tour. An unfortunate moment dropped him down to 22nd overall on lap three, but Dan was able to fight back into 18th place, and fifth in class before the finish.

“Ian had a good run in the first race, we were unlucky there was a little bit of contact in the pack which Matt was involved in too but it was just one of those things”, reflected TCR team principal Lee Brookes, “The second race was good, Matt came through very well and we just needed a bit more time – the pace was there for more.

“The last race didn’t work out how we wanted, the set-up wasn’t quite right for the conditions, but we took points away and came back without any damage so that’s the main thing. Dan did a good job when you look at how the weather was, the last race was very tough for him as he’s still a true novice to be honest. He did well, though, brought the car home safely and that was the focus.”

With only one weeks turn around until the next round at Croft during the weekend of 18th & 19th June, not having any damage to the cars will be a real bonus for the team and their preparations.

There are three more meetings over the year with the following dates and venues:

1 year ago
Request a Free Quote