The forth meeting of the year and rounds 10, 11 & 12 saw the TCR team and the Ginetta GT5 Challenge head over the channel to the magnificent circuit of Spa Francorchamps in Belgium and what was set to be a busy few days of testing and racing.

The weekend start on Wednesday with a full day of testing lined up. With the morning generally dry, only the occasional rain shower stopping play, it was a good opportunity for Ian and James to learn the circuit, while Callum focused on bringing his times down. A rain soaked afternoon significantly reduced the amount of running any one could do and with the forecast of a hot and sunny race weekend there was little to be gained from pushing the car in such poor conditions.

Thursday saw slightly better condition with the first session starting on a damp track but quickly drying, bringing out the slicks. Good sessions by all the team saw James and Callum topping the timings while Ian was running a strong 6th.

Friday, 10th July, was the start of the racing weekend for the Ginetta GT5 Challenge and we were blessed with perfect blue skies and rapidly increasing temperatures. Callum starred in the qualifying session to seal a superb pole position after edging out championship-leading team-mate James, with Ian qualifying in 8th place, and these positions were to be the same in race two.

At the beginning of the first race Callum made his grid-topping start count. Never realistically challended throughout the eigth laps, Callum was able to control the race from the front and build a handsome cushion. His lead going into the final lap was an outstanding 7.3 seconds and with no mistakes over the final 4.3 miles of racing, Callum bagged his maiden victory in style. He also secued fastest lap with a time of 2m50.200 seconds to claim a perfect points haul.

James slipped behind arch-rival Ollie Chadwick on the opening lap and the pair became embroiled in a very close see-saw battle which, in part, helped Callum to run untroubled to the finish. After passing Ollie for second at the chicane on lap four, the pair did switch positions again but the TCR racer managed to see off this challenger to take second place.

Everything was set for all three TCR cars to finish in the top six with Ian on course to finish in sixth position with a couple of laps to go. Having gained the two positions from his starting grid in the first couple of laps, Ian held the place racing well to see off some close attention from Jack Minshaw at mid-distance. Having pulled out a comfortable gap to jack an unfortunate engine blow-up on lap seven resulted in a bitterly disappointing non-finish. 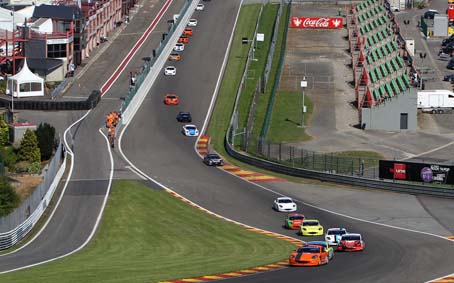 In round 11 on Saturday morning, Callum again made the most of pole position to lead but James was determined to make a return to the top step of the podium and he moved ahead on lap one before Callum hit back on the second tour.

With mere fractions of a second separating the top three, Callum ahead of James and Ollie, as the battle over second position intensified on lap five Callum was able to scamper into the distance and he went on to claim his seecond consecutive victory by over six seconds.

James and Ollie fought tooth and nail, swapping places several times,but it was TCR’s points leader who again came out on top after seeing off Ollie on the penultimate tour and he also secured the fasted lap of the contest with a best time of 2m49.556 seconds.

Ian started well and was involved in a 4 way fight for 5th place, when a tangle between Nick Zapolski and Luca Hurst resulted in Ian taking a hit on the side of the care and dropping down to 15th position and concluded lap one in 13th position. By the end of lap two Ian was up into 11th place and carving his way through the order well. Gaining two or more places on the third tour, he then had to chase down the 7th & 8th place runners. Gaining over 4 seconds on the pair ahead of him in the final couple of laps Ian had the chance of claiming one or two more places from what had been a disappointing first lap. However, a small mistake while lining up for an overtake through the double lefthander saw Ian run wide and had to settle for ninth position at the chequered flag.

Round 12 provided James with his opportunity to return to winning ways, but he had to fight very hard indeed with Callum never more than a few tenths of a second behind for the majority of the race. Over the final couple of tours, James was able to pull further clear to win on lap seven by 2.7 seconds while Callum finished over 10 seconds clear of third position and tool fastest lap.

Ian claimed his best result of the weekend in seventh spot with a great drive, initially runing in eigth place, Ian had a great run on Luca Hurst down the main straight and moved past into the chicane and set about catching James Robinson in 6th. Making some good initial progress and getting to within a second of James, but with the tyres going off the gap to the op six was too much to bridge, Ian again underlined his promise at the wheel of his Ginetta G40.

“What a perfect weekend, absolutely fantastic – you can’t ask for much more than three wins from three and three one-two finishes”, said elated TCR team principal Lee Brookes, “We’re absolutely delighted for Callum to get his first win and then double up in race two and James did a mega job as he always does. To be one-two in the championship is exactly where we want to be and with Ian racing strongly again, it really has been a superb weekend for the whole team. There’s still a long way to go in the championship, but we’re very happy.”

Brands Hatch Grand Prix Circuit in Kent will welcome the Ginetta GT5 Challenge back to UK shores three weeks from now, on 1st/2nd August, for rounds 13, 14 and 15 of the season.

There are three more meetings over the year with the following dates and venues:
August 1st and 2nd – Brands Hatch GP
August 22nd and 23rd – Snetterton 300
September 12th and 13th – Donington Park International.