The second round of the 2016 Ginetta GT5 Challenge was at the super-fast Thruxton circuit over the weekend of 7th & 8th May and was the first of two outings this year as part of the support package to the British Touring Car Championship (BTCC). It was going to be a busy weekend for the TCR team with the 3 cars of Ian, Matt and Dan in the GT5 Challenge plus 4 junior drivers in the Ginetta Junior championship.

The atmosphere in the crowded BTCC paddock was incredible with huge crowds even for the qualifying sessions on the Saturday, so the pressure was on to put on a great show for the occasion.

With no test day for this weekend it was straight on to business and Saturday was Qualifying and race 1 for the GT5 championship. In complete contrast to the previous round at Brands, the weather was very much on our side with hot and dry conditions, you couldn’t have asked for better racing weather. 11:45am qualifying time and the circuit was heating up nicely. With no GRDC+ category this weekend finding a clear space on the track wasn’t too much of an issue, although a 22 car field was still very healthy.

Qualifying ran smoothly this time for all three drivers, with Matt making the most of his new rubber and setting the second fastest time, although slightly worryingly nearly a second behind the pole sitter, Ollie Chadwick.

There was then a 7 way fight for third place on the grid with only 0.7 of a second separating the group and Ian managed to take 6th place, less than 0.15 of a second off Third place! Dan put in a solid performance while trying to learn the circuit and qualified 18th on the grid.

With such a tightly bunched midfield this was looking like a close race with both Ian and Matt in with realistic chances of podium finishes. 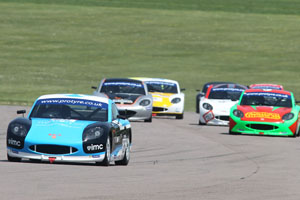 The first of two races for the GT5 Challenge was schedule for the closing act of the Saturday following the BTCC qualifying session and there was still a good crowd as the cars headed out on to the grid. The weather was still sunny and the track had heated up a lot during the day meaning they had to be careful not to overheat the tyres in the early stages of the race.

At the start Matt had a poor get away and by the time they reached the first braking areas at the complex there was nothing between 2nd and 6th. Matt unfortunately lost a place dropping to 3rd while Ian managed to gain a place and moved up into 5th, with this 5 car train managing to break away from the chasing pack. Over the next few laps the 5 cars all changed places with Matt taking back 2nd and Ian getting up to 4th place. Then as Matt managed to pull away from the fighting group, Ian dropped down to 5th swopping places almost every lap before finally finishing 5th right on the bumper of 4th place, Nick Zapolski, and taking the Am class win.

Matt managed to close the gap on the pole position driver and race winner Ollie Chadwick but couldn’t get close enough to challenge. Meanwhile Dan had an eventful first race getting a superb start taking him up to 13th by the end of lap 1, but then some poor driving from one of the other drivers, hitting Dan sending him into a spin dropped him to the back of the field. Never giving up Dan managed to fight his way back onto the rest of the field and managed to get past a few, taking 19th position at the end.

Sunday arrived with blue skies and the promise of another hot and dry day. For race two, the GT5 challenge was positioned as the warm up act for the second BTCC race of the day, just after lunch and with a big crowd watching all three drivers were determined to put on a great show. The grid positions were determined by the race results from race one, with Matt and Ian having good positions while Dan had his work cut out and ground to make up. 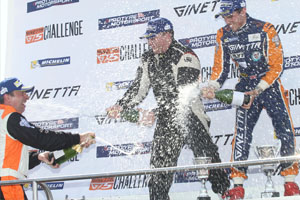 Matt made a slightly better start this time but was still a little sluggish of the line and by the time they reached the complex he was sandwiched by Nick Zapolski and Jonny Hadfield with Ian right on their bumpers. But this time Matt managed to muscle his way through to retain 2nd place and chase after Ollie Chadwick in the lead, leaving the other 3 to fight it out for 3rd place. It was Ian who twitched first making a mistake at Goodwood running wide and losing time through the fast section and was fortunate to fend off the 6th place car of Matt Flowers. With Nick and Jonny in a fight for 3rd Ian was able to chase them down and join the fight and at one point made it up into 4th, but an aggressive move from Jonny Hadfield made this short lived. Ian wasn’t done though and the two of them continued the rest of the race bumper to bumper with Ian trying several moves to get past but Jonny held fast. With these two fighting, Nick was able to pull about a 1 second gap and held that to take 3rd place with Jonny taking 4th almost pushed over the line by Ian in 5th place, which again was good enough for the Am class win.

Matt again chased down Ollie, but couldn’t get close enough to mount a challenge but took another well-deserved 2nd place behind Ollie Chadwick. Dan had reasonable start and made up a few places over the opening laps, but then with the tyres degrading a self-inflicted spin sent him to the back of the pack again. Working his way back onto the pack Dan managed to get back to his starting position of 19th by the end of the race.

There were only 2 races for the GT5 challenge this weekend but it has been a successful weekend for the team with both Ian and Matt enjoying 2 podiums and a good haul of points.

“In the Challenge, everything went pretty much to plan really as we knew we’d be quick around Thruxton and Matt did the job with two second places. Ian had two incredible races really, he was in fantastic form and raced brilliantly”, said TCR team principal Lee Brookes.