…as part of the support package to the British GT Championship, with everything compressed into the Saturday 28th. It was going to be a frantic Saturday with no room for mistakes, as the limited time between each race would prevent any meaningful work being carried out. The TCR team with the 3 cars of Ian, Matt and Dan in the GT5 Challenge were entering the weekend a little on the back foot as testing hadn’t gone as well as hoped.

Ian & Dan started their testing on the Wednesday prior to the race weekend, but on the slightly shorter Island circuit. Dan was out to learn the circuit and started to put together some solid lap times, while Ian was struggling to get down to the times he had expected. Although suffering a niggle gearbox issue, it wasn’t enough to explain the drop in time, so between sessions the team checked the car and found the brake bios was completely out.

With the brakes reset and the track still dry, Ian went 2.5 seconds quicker only 0.4 seconds off the front runners pace of 2015 and things were looking encouraging for the weekend, while Dan was continuing to improve and bring down his own times. Unfortunately the third session of the day was damp and times couldn’t be improved.

On Friday test day, this time on the full circuit, Matt had to miss the morning session as he had an English GCSE exam to contend with, while Ian and Dan set about translating their work from Wednesday on to the main circuit. Ian had had a new gearbox fitted and the brakes overhauled to ensure no reoccurrence of the problems seen on Wednesday. However, pulling out of the banked hairpin on lap two of the first session, no drive and Ian had to pull over and caused the first red flag of the day. Fearing the worst that the new gearbox had failed the team quickly got to work to identify the issue only to discover that the nearside driveshaft had failed and 30 minutes later the car was fixed and ready for the second session.

With the driveshaft fixed it was back out to try and set some good times, but try as they could neither Dan or Ian could get the times down to where they expected to be, with the cars not handling as they had on the Wednesday. Matt joined the team in the afternoon and although running closer to the front was still struggling to match the pace of the front few. Not a great preparation for the race day, but the team made a few adjustments to the brakes and suspension to try to improve the situation ready for Qualifying.

With everything happening on the Saturday for this weekend it was straight into action with a 9am qualifying session followed by race 1 before lunch and then races 2 & 3 in the afternoon. The weather was on our side with warm and dry conditions, you couldn’t have asked for better racing weather. 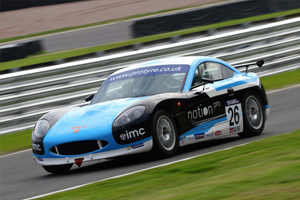 Dan had the best qualifying session managing to improve on his best time by almost 2 seconds, putting him 16th and 5th in the Am class. Matt & Ian were both struggling with massive under steer not allowing them to turn into the faster corners. Ian was paying the price for destroying a full set of tyres in qualifying at Thruxton and then having to use up a second set during the races. Matt faired the better of the two qualifying 3rd, but a full second off the pole sitter, while Ian could only manage 12th, over 2 seconds off where he would have expected to be and only 3rd in the Am class.

The Team decided to try a few changes to the front suspension to give Ian and Matt a little more turn in and hopefully allow them to fight during the race.

The first of the three races for the GT5 Challenge was schedule for just before lunch. The weather was still sunny and the track had heated up a little during the day meaning they had to be careful not to overheat the tyres in the early stages of the race. At the start Matt had another poor get away and by the time they reached the first corner was down to 4th with the 5th and 6th place cars all over him. Matt quickly upped his pace pulling away from 5th and set about challenging for 3rd place. Ryan Hadfield put up a valiant fight but with 2 laps to go Matt finally got past into 3rd place, but it was too late for him to do anything about catching Jonny Hadfield and Ollie Chadwick ahead of him and had to settle for third place. From 12th on the grid, third in the Am class, Ian enjoyed a great opening lap to leap into the top 10 overall, as well as second in class, and although elbowed back to 11th place by a ‘pro’ car on lap two he retained his class position. Closing on the Am leader during the latter stages, he took the flag second in class and 11th overall. Dan began 16th overall, 5th in Am class, and although bundled back to 19th place on the first tour he battled his way through into the top 16 by lap four. Edged back a spot on lap six, Dan again moved back into 16th on the final lap and also retained 5th in class.

The GT5 Challenge was back on track straight after lunch lining up in the order they finished race1. Matt had a better start this time but still dropped behind the fast charging Ryan Hadfield as they entered turn one. Ian made a great start jumping a couple of places off the line and was right on the bumper of the Am leader and main chasing pack, then chaos, with the three cars ahead of Ian all coming together and the two team 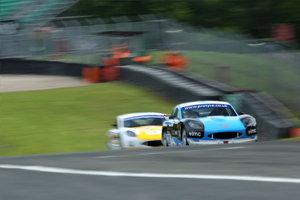 mates of Jack Minshaw and Glen Broster ending up in the barrier, Ian managed to negotiate his way around the carnage and into 8th place and the Am class lead, while Dan worked his way through and held onto 16th place. No sooner had the cars reached the back straight and the safety car was out.

Disappointingly, that was the entire racing permitted in the second race due to the length of recovery time taken to retrieve the stricken cars. With the safety car still on track and the allotted race duration almost completed, officials opted to show the chequered flags at the end of lap five with the race order declared as per the opening lap, giving Matt 4th, Ian 8th overall and Am winner and Dan 16th overall and 5th in the Am class.

With the reverse grid for race 3 being pulled out as 9th place, Ian would be second on the grid for the start of race 3, with Matt in 5th and Dan in 16th. Ian certainly made the most of his opportunity to move into the lead, holding first place around the outside at Old Hall and he stayed at the front of the field until the start of lap two when Matt moved past at the first corner.

Matt had put together an exceptional opening lap from 5th on the grid to climb into the top two. After getting ahead of Ian, Matt rocketed into the distance and opened a commanding lead. Going on to build a lead of over four seconds, he continued to push and took the flag on lap eight, 5 seconds to the good.

“I’m absolutely elated with the win”, reflected Chapman, “The team did a really good job with the set-up of the car and we definitely proved we can pile on the pressure and win races. It’s been a great weekend.”

Ian, meanwhile, battled brilliantly to keep a stream of Pro drivers behind and help Matt to build a comfortable lead, holding onto second place for another two laps until a robust move around the outside of Lodge allowed Jonny Hadfield to make his way through leaving Ollie Chadwick and Ryan Hadfield snapping at Ian’s bumper. Keeping the others at bay for a further lap before a small mistake into the fast right hander of Druids made the car run wide allowing both Ollie and Ryan through. Ian continued to cling onto the tail of Ryan bring the car home in 5th overall and a comfortable Am class win.

Although Dan’s race didn’t end as he wanted, the first year Ginetta GT5 Challenge racer performed well until his enforced retirement. Moving into the outright top 15 by lap three and then 14th position the next time around, Dan held fifth in the Am class and looked well set for a strong finish but the lap six tangle at Hislops ruined his hopes.

“It’s been a long time coming but we’re absolutely delighted for Matt”, said TCR team principal Lee Brookes, “We all knew the pace was there to get the win and one of the biggest things was proving we could do it by coming through, we didn’t start at the front and drive away. It was a great drive from Matt, now he’s got the first one under his belt hopefully some more will follow.

“Ian did a great job again, it was fantastic to see him leading a race for the first time and to get some more class wins was as much as you could ask to be honest. Dan raced well again this weekend, he’s continuing to improve and was just unlucky in the last one – these things happen though.”

1 year ago
Request a Free Quote