The final meeting of the year and rounds 19, 20 and 21 saw the TCR team and the Ginetta GT5 Challenge head North to Leicestershire and the challenging Donington Park Grand Prix circuit.

The team had started the weekend early for this event with Monday adn Thursday test days prior to the race weekend. Monday provided Ian a good opportunity to learn the circuit, while Callum was setting a very solid pace and James had decided to sit this one out, relying on the Thursday session to be sufficient.

As Thursday arrived, things started to go wrong for the TCR trio. There had been some confusion over the bookings meaning none of them had a place on the test day. After several frantic phone calls around the other teams TCR managed to secure a few slots for the afternoon. To further add to the problems, James had been taken violently ill with a stomach infection, meaning he was bed ridden and too weak to do the test day – not the best preparation for your potentially championship winning weekend!

Ian and Callum made the most of the sessions they had on the Thursday afternoon both setting faster times than Monday, with Callum very much at the front of the field and Ian looking to be towards the front of the mid-field fight.

Saturday, 12th September, was the start of the final racing weekend for the Ginetta GT5 Challenge 2015 and there was a 3-way fight for the overal championship. James Kellet leading by 34 points over Ollie Chadwick, who had a further 40 points on Callum Pointon, and with nearly 80 poits up for grabs over the weekend, there was everything to play for.

They were greeted at the circuit with a very dark sky and several heavy rain showers making the circuit very slippery. James had recovered a little and was able to make it out in qualifying, although not looking in the best of health!

Qualifying kicked off around 9:30am, and despite James best efforts the pole position went to Ollie Chadwick for both races 1 and 2 of the weekend, with James second. Both Callum and Ian struggled to get the best out of the car with continuous traffic from the GRDC+ class, pushing them down to 5th and 9th respectively for race one, and 3rd and 11th for race two.

In the first race of the weekend, it couldn’t have gone much worse for James. a good start saw him pull around the outside of Ollie into Redgate, only to be pushed wide dropping him back and providing Callum the perfect opening to jump into the lead by the second corner and heading down the Craner curves. Coming down the Craner curves and braking for the old hairpin, James had to concede to Stuart Linn and then disaster. As James turned into the old hairpin an ambitious move by Ryan Hadfield saw contact and resulted in James finishing in the gravel trap and out of the race.

Ian had a strong start from 9th holding position and right on the back of the main pack. Unfortunately evasive moves avoid the mayhem caused by James spin dropped him back to 11th before the safety car came out.

Following the restart Callum was able to pull away into a commanding lead as the other drivers fought amongst themselves giving him a comfortable win and also helping James by reducing the points tally from chief rival Ollie.

Ian, meanwhile, had a strong drive getting back up to 9th place by the end of the shortened race. Once he had passed the first couple of cars he had dropped back several seconds from the main pack, and although able to keep pace with them, was unable to close in to gain any more positions.

With the complexion of the championship having dramatically change in race one, round 20 on Sunday morning had a crucial role to play in the outcome of the 2015 crown. James began the race second on the grid, with Callum third and Ian in 11th position.

At the start, James made an excellent launch to squeeze ahead of pole-starter Ollie on the run into Redgate but through the Old Hairpin the positions switched and then, into Coppice, Callum moved past his team-mate from third.

Callum began to close down Ollie on lap two and, with an excellent move on the brakes into Melbourne Hairpin, he grabbed the lead while James held third some way back. Ollie had a look at Callum into the Esses on lap four but the move didn’t work and the delay for both gave James the opportunity he needed to slice past with a superb move into the hairpin to grab the lead.

His turn at the front didn’t last long, though, when he was elbowed down to third on the run into Coppice on lap five – first passed by Callum on the rise from McLeans and with Ollie then moving through into the next right-hander. Ultimately, James was edged back to fourth and that’s where he stayed to the conclusion, which meant he dropped to second in the point’s table.

Callum, meanwhile, led all the way to the chequered flag on lap 12 as he managed to fend off the challenge of Ollie through the traffic to secure his second win of the weekend and fourth race victory of the season.

For Ian, an opening lap excursion into the gravel at Coppice avoiding a multi car incident dropped him down to 17th position but he battled back well to finish in 13th place. With a big gap to make up to the pack after the first tour, the TCR driver produced some strong lap times to salvage the best result possible.

Having to come from behind in the championship for the first time since May, James started the final race from fourth – while Callum led away from pole – and after taking third place at the beginning of lap four he had one hand on the champion’s trophy when Ollie ground to a halt, due to a prop shaft failure.

James eventually finished in third place while Callum led all the way to the Esses on the last lap when he got caught out by gravel, dragged on to the track in an earlier accident, and ran wide before rejoining in second which he held to the flag in what was a safety car dominated encounter.

Lining-up 13th on the grid, Ian swiftly climbed into the top 12 and then moved into the top 10 at the first Safety Car. With racing laps seriously limited due to the cautionary periods, Ian had little chance to make huge progress but did cap the finale with a strong ninth place result.

“Callum has had a superb weekend”, added Brookes, “We’re all a little bit gutted he didn’t get the three wins but we’ll take two and a second place – fantastic for him and a superb way to end the season. Ian has had a strong year, brilliant for his first season back racing for a long time and not too far away from a top 10 finish in the championship. All in all, it’s been an incredible season.”

“It’s been up and down for James all weekend, we’ve had bad luck but it actually turned round for us in the last race. It’s unfortunate for Ollie, you don’t wish that on anybody, but we had bad luck on Saturday and some better fortune on Sunday.” 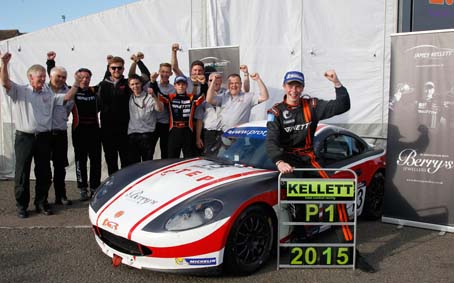 “The guy who should have won it has won it. I’m so pleased, two years now we’ve won this championship and we’ve got some cracking lads in the team. Everyone has done an absolutely superb job all season.” (Lee Brookes TCR Team boss.)

Ian Robinson added – “It has been a great first year back into racing and the TCR team along with Callum and James have been a huge help in getting me quicker and quicker at every meeting. There has been a few lows throughout the season with the crashes at Silverstone and Brands Hatch, as well as the engine failure at Spa, but it has been a thoroughly enjoyable season and I am looking forward to being able to fight a little closer to the front of the field next year.

With the provisional details already released and indicating two rounds along side the British touring Car Championship as well as returns to the Grand Prix circuits of Silverstone, Spa, Brands Hatch and Donington Park, 2016 looks like it could be even more exciting than 2015. I hope you have enjoyed my adventures in the Ginetta GT5 Challenge along with James, Callum and everyone at TCR and hopefully I will see some of you at the circuits next year.”