The fifth round of the 2016 Ginetta GT5 Challenge was back with the British Touring Car package at the Yorkshire based Croft circuit and represented Ginetta’s home meeting, held over the weekend of 18th & 19th June. The TCR team with the 3 cars of Ian, Matt and Dan in the GT5 Challenge were joined for the weekend by the 4 Junior drivers competing in the Ginetta Junior Championship, who are a usual part of the BTCC package, so it was going to be a busy weekend for the team. There was a little apprehension from the Challenge team as neither Ian nor Dan had ever driven the circuit in the dry and never raced here, while Matt had only raced at the circuit in Juniors and couldn’t make the Friday test day due to a couple of Physics GCSE exams.

Ian & Dan had two 40 minute test sessions on the Friday morning prior to the race weekend in order to learn the circuit and hopefully get some dry running as the weekend was forecast to be dry, although overcast. The initial session was overcast and the track still slightly damp from the previous nights rain, but this soon dried out leaving some clear dry running for the team. Although struggling with the old tyres, both Ian and Dan put in some respectable times coming up 6th and 7th on the time sheets. In the second session, although spitting with rain, on new tyres Ian managed to find another second of time taking him up to 4th on the timing sheets, while Dan struggled to benefit from the new tyres and dropped a couple of places. But all in all it was an encouraging test session for both Ian and Dan.

Saturday arrived and although overcast, it was certainly brighter than Friday and no real sign of rain. With qualifying not until 13:40am it felt a very leisurely morning waiting for everything to start. Matt had joined us ready for the qualifying session hoping the changes to the car the team had made from Silverstone would pay dividends in the qualifying session. With final preparations completed the team headed down to the assembly area, deliberately late to start at the back of the pack and create a little space for them, hopefully allowing them to run together.

With the session underway, the idea of holding back had paid off and all three drivers had a good amount of space to post some fast times. It was Ian who set the early pace with his first flying lap taking him to 2nd place, steadily getting quicker. On lap 4 Jonny Hadfield took 2nd place, with Ian setting his fastest time on Lap 5, only 6 tenths off Pole and a huge 1.3 seconds quicker than Ian had managed in the Friday test. Unfortunately Matt was struggling with the car and was running about 4 tenths off Ian but down in 8th place, while Dan had improved on his Friday times he was in 12th.

After 8 laps the red flag came out due to a car in the gravel so it was all back to the Pits. With only 4 minutes remaining when the circuit went green again, Ian decided to stay in the Pits and preserve his tyres while Matt and Dan went back out to try for one more flying lap. Neither Matt or Dan managed to improve their times in the last lap, but unfortunately for Ian, Ryan Hadfield managed to find a couple of tenths and stole his 3rd place by 3 hundredths of a second, demoting Ian to 4th on the grid, and effectively the Am Class pole, but a great effort on a new circuit.

The first of only two races for the GT5 Challenge this weekend was schedule for 16:40 on Saturday afternoon. The weather was a little brighter but still overcast, but most importantly no sign of rain. As they formed up on the grid with Ian again on the front two rows of the grid it was looking like a very tight race with less than 9 tenths of a second separating 3rd to 11th, with Dan in 12th just over a second off Ian’s time. At the start it was Ian & Ryan on the second row that got the better starts both going around Jonny Hadfield into the first corner right behind Ollie Chadwick. However, Jonny got a great run out of the initial complex and managed to get back past Ian at Tower, but the front four were starting to break away. By the end of the first lap the front four had a comfortable lead over the chasing pack, which included Matt and Dan.

Matt started to make steady progress and was fighting his way through the chasing pack. Dan was also fighting hard and was holding second in the Am class but with Glen Broster pushing him hard for that honour. With the front 4 still pretty close together, a mistake by Jonny Hadfield going into Sunny In, led to an excursion over the grass, letting Ian back into 3rd place with Jonny getting caught up by the chasing pack. Ian was now in a comfortable 3rd, running about 6 seconds behind 2nd but a long way ahead of 4th, so settled into a comfortable pace to bring the car home, something he would regret at the end! Meanwhile Matt was making good progress through the pack and by lap 10 had made his way up into 5th place behind Jonny Hadfield, while Dan was still fighting with Glen for 10th place and second in Am class. 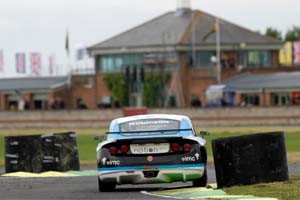 Then it all started to go wrong from the TCR trio. As they came around on lap 11, an overly optimistic move by a new comer to the championship push Matt onto the grass and demoted him back down to 7th place costing him precious championship points. Slightly further back the pressure from Glen had eventually paid off as a small mistake by Dan allowed Glen to squeeze through a steel 10th place and second in the Am class from him. At the front Ian’s steady pace had kept him clear of the chasing group but on the last lap dropped him to over 10 seconds behind Ryan in 2nd place, only to be informed afterwards that Ryan had been given a 10 second penalty for a jump start, robbing Ian of 2nd place. But the 3rd place finish still gave Ian his best ever result in the Ginetta GT5 championship and his first overall Podium as well as the Am class win.

Race two of the weekend was on Sunday afternoon, just before the second British Touring Car race, so again it felt like a leisurely start for the team, although the usual preparation needed to be done and additional work was to be carried out on Matt’s car in order to try and rectify the issues he was experiencing with handling. With Matt’s main difficulty being the drive out of the corners the team decided to check the dampers and as a precaution changed the differential to eliminate it as a potential problem.

With all of the work completed the team headed down to the assembly area for the second, and final race of the weekend. Having started quite sunny, it was now beginning to cloud over and there was a threat of rain coming in later, although it should be after the GT5 race. With the grid created from the results of race 1, Ian was in third, with Matt 7th and Dan 11th.

This time a bad start from Ian meant that both cars from the row behind jumped him and pushed him back into the pack at the first corner and into 6th place. Ian managed to hold 6th keeping with the front six and edging away from the second group in 7th and back, but it was immediately obvious that the car was not as settled as Saturday and significant under steer into the slower corners was making him vulnerable to attack and certainly wasn’t allowing him to attack for 5th place. 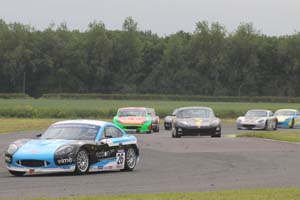 Both Matt and Dan had made steady starts, pretty much holding their positions, but Matt was still struggling with his car and the lack of drive coming out of the corners hadn’t improved, and he was now experiencing under steer on entry as well. A couple of laps in and an incident at the first corner brought out the safety car and created chaos as some of the drivers didn’t see the flags and gained places illegally under the yellow flags costing Matt and Dan places. At the restart Ian got a poor get away through the slow complex, dropping back from the front pack and falling into the chasing pack. With no front end grip Ian was struggling into the second corner and not able to get the power down for the long straight that followed making him a sitting duck, losing two places in the next couple of laps. Matt was still managing to fight with his car and was next to catch Ian, and the two of them fought for several laps with Matt appearing to be able to turn in to the corner but not drive out, while Ian couldn’t turn in but had good drive out. Eventually Ian’s lack of turn in allowed Matt to get far enough alongside to prevent Ian’s better drive from getting him back in front and the two of them crossed the line in 8th & 9th place and the Am win for Ian, although they were later promoted to 7th & 8th due to penalties for one of the drivers who had gained an advantage under the safety car. Meanwhile just behind Matt & Ian, Dan was having one of his strongest races this season running just behind Matt in 10th after the safety car, 2nd in the Am class and having a great battle with Matt Flowers and Matt Palmer. Dan managed to fend them off until the last couple of laps dropping to 12th over the line, but promoted to 11th with the above penalty and second in the Am class.

“It’s been a bit of a mixed weekend for us but we’re pleased to see Ian and Dan doing so well in the amateur class in the Challenge and for Ian to pick up his first outright podium finish”, reflected team principal Lee Brookes, “Obviously we’re disappointed for Matt who didn’t have the most straightforward weekend, but there are positives for us to take away.” 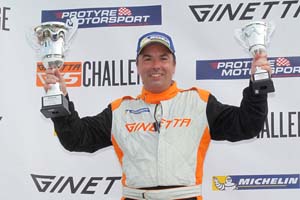 With only two rounds remain there is a three week gap until the next round, which provides an international adventure for the TCR team with a trip over to the legendary Spa Francorchamp GP circuit in Belgium during the weekend of 8th & 9th July.