The fifth meeting of the year and rounds 13, 14 & 15 saw the TCR team and the Ginetta GT5 Challenge head south of the Thames to the historic Brands Hatch Grand Prix circuit.

The weekend effectively started on the Wednesday with a full day of testing on the GP circuit. This turned out to be a very busy, and not very productive test session for the team with various red flags and general over crowding leading to very few complete and representative times. However, it appeared that James and Callum were on the pace and that Ian was getting closer with each session, but still had work to do if he was going to be able to battle for a top 6 position.

Friday tesing was restricted to the shorted Indie circuit due to some strange licencing issues for the GP circuit so little could be gained, other than time in the car. Thankfully the weather was being good and it looked like the team were going to enjoy the first sunny weekend of the year in England.

Saturday, 1st August, was the start of the racing weekend for the Ginetta GT5 Challenge and we were again blessed with blue skies and warm temperatures.

Qualifying kicked off around 11am, and despite James and Callum’s best efforts the pole position went to Ollie Chadwick for both races 1 & 2 of the weekend, with James second and Callum third in both races. Ian’s weekend got off to a very poor start failing to deliver anywhere close to the potential shown in testing, pushing him down into 15th for race 1 and 12th for race 2.

James lined-up second on the grid for the opening race of the weekend on Saturday afternoon and spent the entire nine lap encounter in that position, never more than a few tenths of a second shy of the back of pole qualifier Ollie’s Ginetta.

Proving his pace with the fastest lap, a new Ginetta GT5 Challenge lap record for the GP Circuit of 1m40.472 seconds, James remained glued to the rear bumper of his rival’s car but just wasn’t quite able to make a decisive bid for the lead and instead settled for second just 0.4 seconds adrift. 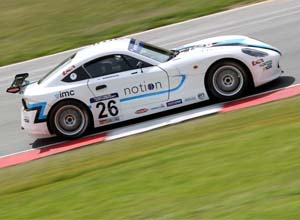 Team-mate Callum, startin in third place, slipped to fourth on the first lap but quickly hit back on lap two to run within 0.9 s
econds of James. Edged back to fourth position on lap six, following a tangle with a back marker, Callum was then elbowed down to sixth a lap later where he eventually finished.

Robinson, meanwhile, had a big task on his hands from 15th on the grid, made even more difficult having to avoid a spinner at the first corner dropping him back to 18th, he mounted an impressive drive. Into 14th place as the race headed into lap four, Ian gained three more positions in as many laps and retained 11th spot to the flag on lap nine, with his fastest lap some 2 seconds quicker than his qualifying time.

For round 14 on Sunday morning, James and Callum lined-up second and third respectively and remained in that order until the final lap when Callum, taking full advantage of a late Safety Car period caused by team-mate Ian, managed to pass James for runner-up spot.

James had taken the fight to pole-started Ollie throughout the race, as he did during the first encounter of the weekend, and was never more than 0.3 seconds shy with fastest lap pace. Callum, who slipped away from the lead pair prior to the Safety Car, made the most of the cautionary period and after a stunning re-start he was able to demote James to third place. 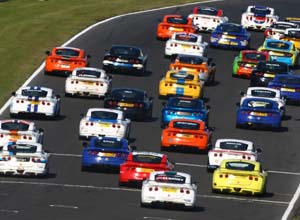 Ian, who started in 12th position, progressed into 11th place on lap two and set about closing in on the group ahead. On the fifth tour an excursion into the gravel trap coming out of Paddock hill resulted in contact with the barriers ruled him out on the spot. James, meanwhile, again ended up with the fastest lap of 1m42.305.

The championship leader returned to winning way in round 15, taking his ninth victory by 1.1 seconds having had to battle his way through from fourth. Slipping back from third place at the start, the TCR driver mounted an excellent recovery and delivered typically outstanding pace.

Moving back into third on lap two, James then grabbed second from Ollie at the end of lap three at Clearways before setting his sights on team-mate Callum who led away from the line at the beginning, after getting ahead of pole starter Ollie.

Pressuring Callum heavily, setting fastest lap on the fourth tour, James made his move on lap six with a good pass into Druids and then pulled clear during the second half of the contest to claim the win relatively comfortably.

After being edged back to second on lap six, Callum was passed by Ollie two laps later and then remained in third to the finish but did secure the fastest lap of the race on the ninth tour with a time of 1m41.602 seconds.

Ian, meanwhile, had a very tough challenge from 18th on the grid – a result of his unfortunate non-finish in race two – but produced a memorable grandstand performance on his way to a superb 11th place result.

Into the top 20 on lap one alone, Robinson held 18th position at mid-distance and gained a number of places in quick succession to work his way into the top 12 with a couple of laps to run. Taking 11th place on the final tour, the TCR driver ended the contest just 0.7 seconds shy of the coveted top 10.

“It’s been another strong weekend for the whole team, James did a great job to win the final race and he’s kept hold of a strong points lead which is important with only two weekends to go”, said TCR team principal Lee Brookes, “Callum deserved a bit more than he got in the end, but two more podiums is still good and keeps him well in the top three. “We’ve been really impressed with Ian this weekend, Brands GP isn’t the easiest circuit but his drive through in the last race was fantastic. It’s a shame he went off in race two but he made amends for that in the last one with a great performance.”

Snetterton 300 Circuit in Norfolk will welcome the Ginetta GT5 Challenge back in three weeks from now, on 22nd/23rd August, for rounds 16, 17 and 18 of the season.

There are two more meetings over the year with the following dates and venues:
August 22nd and 23rd – Snetterton 300
September 12th and 13th – Donington Park International.