The first round of the 2016 Ginetta GT5 Challenge was at the legendary Brands Hatch GP circuit over the weekend of 16th & 17th April and there was a new line up of drivers joining Ian Robinson at Total Control Racing (TCR) for this years season. Running along side Ian this year is Championship hopeful Matt Chapman (aged 16) and Dan Collinson (aged 37).

Matt has graduated from the Ginetta Junior championship securing multiple podium finishes last season and determined to mount a serious challenge to this year championship. Dan only started his motor racing career last year competing in the Ginetta Racing Driver Club and having got the bug decided to step up into the GT5 Challenge and compete along side Ian in the ‘Am’ category of the championship.

The weekend started with official practice on Friday and the drivers were greeted at the circuit with intermittent rainfall in the morning and then heavy rain during the afternoon sessions, creating a lot of difficult running conditions. The day generally went well for the team with all 3 drivers setting competitive times, and all cars survived.

Saturday was Qualifying and race 1 for the championship and the weather was overcast and very cold. 10:30am qualifying time and the circuit was dry but still very cold, so the team went out with new slick tyres. TCR then tried a different tactic holding all three drivers back in the Pits for 45 seconds after the session started to create a window of clear space.

This looked to be a great move until disaster struck on the warm up laps. Firstly for Matt on the very first lap out was aggressively warming up the tyres and got caught out by oil on the track and ended up in the gravel and effectively out. Ian and Dan continued building up the warmth in their tyres, then on the second flying lap disaster struck Ian with the tyres still not up to temperature he committed into Paddock hill bend and the back snapped around leaving him stranded in the gravel.

Only managing to complete one timed lap, this put Ian a long way back in the pack at 19th! Worst still was for Matt after receiving outside assistance to get his car back on the track, all of his times were disallowed and he was back in 35th position and a lot of work ahead of him. Dan had faired the best and was pleased with his 17th place and a great effort for his first qualifying session in the new car.

As we approached race time in the afternoon the weather was decidedly changeable with a dry track but the threat of rain in the air. All cars arrived at the assembly area of slick tyres and an increasing number of rain drops landing on their windscreens. With moments to go before the end of the previous race the heavens opened and even the F3 cars with full aero down force were unable to keep the cars on the track with the rain, so it was a mad rush by 90% of the teams to get wet tyres on!

But as soon as the wet tyres were on the rain stopped and as the cars headed out on their green flag lap the circuit was clearly drying and more suited to slick tyres!

All three drivers got away cleanly and negotiated the first few corners, with Matt making up about 15 places on the first lap! Unfortunately some of the GRDC+ drivers further back didn’t get away so cleanly and the safety car was out for several laps, leaving only 6 minutes of racing at the end.

Matt made the most of the 6 minutes, feeling at home with the car on these tyres as they were the same as his Junior days, finishing a very impressive 9th a 26 place gain. Ian and Dan had made steady progress, but as quick as they could get past someone on wets, they were past by competitors who had stayed on the slicks and ended up 15th and 13th respectively. Not the best of starts for the team, but all cars were in one piece and Sunday would be a new beginning.

Sunday arrived with blue skies and the promise of a dry, albeit cold, day. For race two, all three drivers were determined to make up for lost ground on Saturday but had to start in the positions they finished race one. It was Ian who got off to the best start getting a perfect launch off the line and clearing the two rows ahead of him before the first corner and gaining a couple more places over the next few corners, taking him up to 8th place, but unfortunately for Ian another incident further back in the pack brought out the red flags this time so all of his hard work had been in vain as it was back to the original grid positions for the re-start.

Both Matt and Dan had had poor starts resulting in damage to the front of Matt’s car, but he was still able to take the restart and a second attempt.

Better starts this time for Matt and Dan, and Ian had a good initial launch, but two stalled cars in front of him delayed his progress, however with a few positive moves over the first couple of corners Ian was quickly up into the top ten. Taking a few more positions, Ian was into 6th place by lap 3. Although dropping back to 7th a lap later he remained there to the flag to cap an excellent performance and secure the ‘Am’ class victory.

Matt quickly built on his better start and was up into the top six then set fastest lap of the race before taking 5th and finished just 0.5 seconds shy of 4th place.

Dan also made great progress, coming from 13th on the grid and working his way into the top ten before taking 9th place on the third lap where he remained until the flag and taking second place in the ’Am’ class giving TCR a one-two in the ‘Am’ rankings. 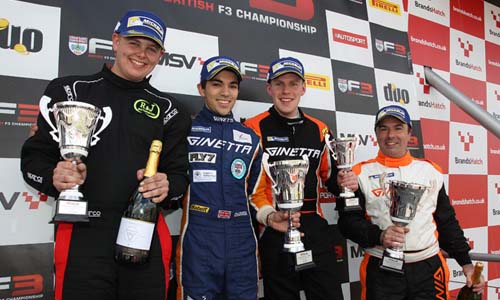 New for 2016 sees a reverse grid randomly selected from 8th, 9th or 10th place in the previous race. With 9th place being selected this put Dan in Pole position, Ian in 3rd and Matt back in 5th.

Ian made the best of the first lap breaking away with 3 of the quick drivers in a 4 way battle for the lead, but as more of the front runners made their way through the field, Ian was slowly edged back finishing an excellent 7th and taking the ‘Am’ class victory again.

Matt made the best of the rest of the race with a fantastic charge through to claim his maiden podium with an excellent runners-up spot. Unfortunately for Dan his race ended in retirement on lap two.

2 months ago
Request a Free Quote