After a 5 week break as the Ginetta GT4 SuperCup missed the Thruxton weekend, TCR and the team were back in action during the weekend of the 20th & 21st May with the third round of the championship. The team entered the weekend with high hopes following a very productive test day for Ian on the previous Friday, but ended up epitomising the phrase “well that’s motor racing for you!!”

Ian, being an Am, had been able to test on the slightly longer circuit at Oulton the previous week enabling the team to try out a number of different setups on the car and there was a good feeling they had made a significant step forward in understanding the car.

On the official test day on the Friday both cars had the new setup applied and went out to see what their pace was in comparison to their respective classes, and it was instantly looking good. At the end of the first free practice session, Reece was running 4th overall, having been as high as 2nd earlier in the session and Ian was running 2nd in the Am class, just 1/10th of a second off the quickest. During the second session a few more drivers caught onto our pace, with Reece slipping to 6th quickest, while Ian was third quickest in the session but still held the second quickest Am time over the 2 sessions. Everyone was looking forward to a strong qualifying session. 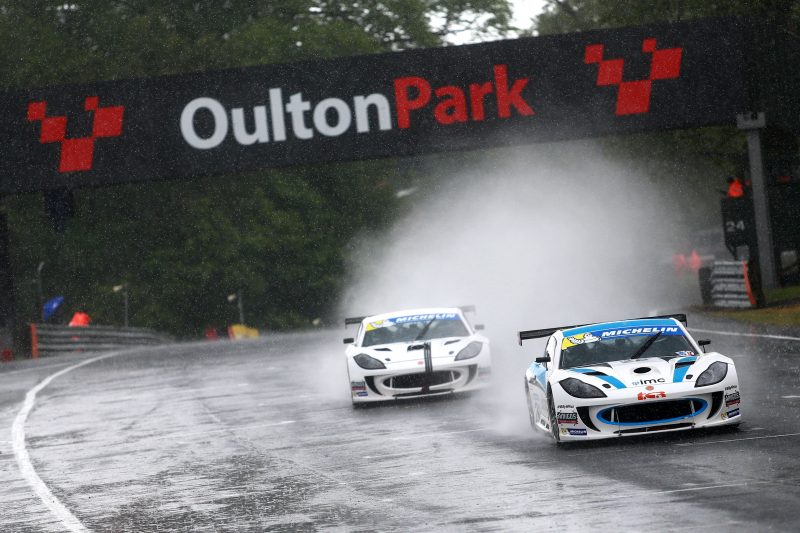 Saturday morning arrived and as the drivers went to their early morning sign on and briefing it looked like the forecast of a dry morning was going to come true. However, as the morning went on the sky turned a very angry black and all the forecast websites changed their minds to rain coming in before 11am, with our qualifying scheduled for 11:35am! The team were confident they had a good wet setting for the car, but wet qualifying always brought the lottery of being able to get that one clean lap in the optimum conditions.

As we approached qualifying, the rain had become increasingly hard and persistent with track conditions deteriorating by the minute. With a red flag in the qualifying session before the Ginetta’s and a further delay while barriers had to be repaired, the conditions continued to get worse with considerable amounts of standing water now on the track.  The Cars were eventually released onto the track about 20 minutes later than scheduled and it was clear to all the drivers that this was going to be an incredibly difficult session. The standing water was now encroaching on most of the corner apexes and worst still on many of the fast straights. After 3 laps Ian had managed to spin the car, losing it when changing from 3rd to 4th gear at over 100mph, but miraculously managed to miss all barriers and ended up on one of the support roads and carried on. Soon after Ian’s little adventure, several other cars had faired far worse and the red flags came out to allow them to be recovered.

Just as they released the cars back out, the rain appeared to ease slightly so Reece and Ian set off to post a more competitive time. On their first flying laps both drivers managed to significantly improve their times and look to be moving up the grid, but as they worked their way round the second lap the heavens opened again making conditions virtually un-driveable and with more cars in the barriers the session was red flagged and finished. Unfortunately for both Reece and Ian, who had both waited in the Pit lane after the first red flag to get some clear space, only managed one flying lap before the second red flag, where most of the others had managed two and secured their fastest times on the second lap, dropping both drivers well down the grid, with Reece in 9th and Ian back in 18th.

The first of only two races for the weekend for the GT4 SuperCup was schedule for 16:40 in the afternoon. The weather was still overcast but it had stopped raining and the track was dry, so we were back to slick tyres, and Reece and Ian were confident that they could make up several places with the pace they had shown in the dry. Reece made a positive start, moving up to 8th through the first couple of corners. Ian made clean start but was unable to gain any places before the first corner and tucked in behind Brooks. Reece was really beginning to show his pace and by the end of lap 2 had made his way up to 6th place and was right on the tail of the leading pack. Lap 3 saw Reece gain another place and was pushing hard for 4th, then, disaster, as they crossed the start and finish line the car shut down with an unknown electrical issue. Reece had noticed a small issue earlier in the day but the diagnostics had shown nothing. The team later discovered that one of the main CAN communication cables (that run at 5V) had been rubbing on the live terminal of the alternator and worn through sending 12 V into the ECU causing the car to shut down as a safety measure!

Meanwhile behind, Ian was also making steady progress and again showing his dry pace. Ian past Brooks on lap 1, followed by Constable on lap 2 and Taylor on lap 3 moving him up to 5th in the Am class. A decisive move down the inside on Kirby into the fast left-hander at Cascade moved Ian into 4th place on lap 4 just before the safety car came out.

At the restart, Ian got a good get away and closed up on Jack Minshaw in 3rd place, while Jack was being held up by a struggling Pro, Perez. This allowed Constable the opportunity to catch back up to Ian and Jack, so Ian was stuck trying to defend from Constable while attacking Minshaw. On Lap 10, a crash up ahead of Ian as they approached Druids lost him momentum and allowed Constable to start an attack going into Lodge and got him along side past the start and finish line and past as they went into Old Hall. Ian managed to get a good run on Constable through Cascade and onto the back straight, but over cooked the lunge down the inside and lost the back end of the car into the hairpin, dropping him right back to 7th place, and effectively where he had started! To make matters worse the crash at druids on the previous lap had brought out the red flags giving no opportunity to recover some of the lost places.

Race two of the weekend was on the Sunday afternoon with a 16:35 planned start time. The weather was a lot better with lighter clouds and the occasional bright spell, but crucially still dry. With all of the problems from Saturday, Reece was now starting in 9th position and Ian was back in 18th again, both with a lot of work to do if they were going to recover any decent points from the weekend.

Reece got another good start and this time was up to 7th by the end of the first lap. The leading 3 had broken away but the rest of the pack was still very close together and by the end of Lap 4, Reece had managed to get up into 6th place and was running at the leading pace. A short spell under the safety car didn’t seem to help Reece and he was unable to make up any more places after the restart and finished the race a very respectful 6th, providing some compensation for the problems suffered in race 1.

Further back Ian made another strong start, this time passing Brookes in the first couple of corners. Ian then continued to make steady progress passing Kirby on lap two and then Minshaw on lap 3, taking him up to 4th in the Am class, but now found himself up behind the slower Pro car of Perez, who was not in the mood for letting him pass. More frustrating for Ian was that the leading trio were tantalisingly close just in front of Perez, and he was showing he had the pace to challenge for the podium positions if he could get past. But try as he did, the young Pro was not going to let Ian past and was being very clever slowing his car right at the apex of the slow corners and not allowing Ian to get a good run out down to the next corner.After several laps with no joy, Ian decided to try getting a run through one of the fast corners with the hope of getting along side and being able to out brake into the slower corners. However, things didn’t go quite as planned as Ian head into Cascade (a fast 4th gear corner), mis-judging when Perez would brake and ended up having to take evasive action, causing Ian to brake wide on the dirty outside of the track and lose the back end, dropping him to the back of the Am class. With only a few laps to go, Ian tried as hard as he could lapping several seconds a lap quicker than the group in front but couldn’t quite catch them before the end of the race, leaving him in a disappointing 9th place in the Am class. 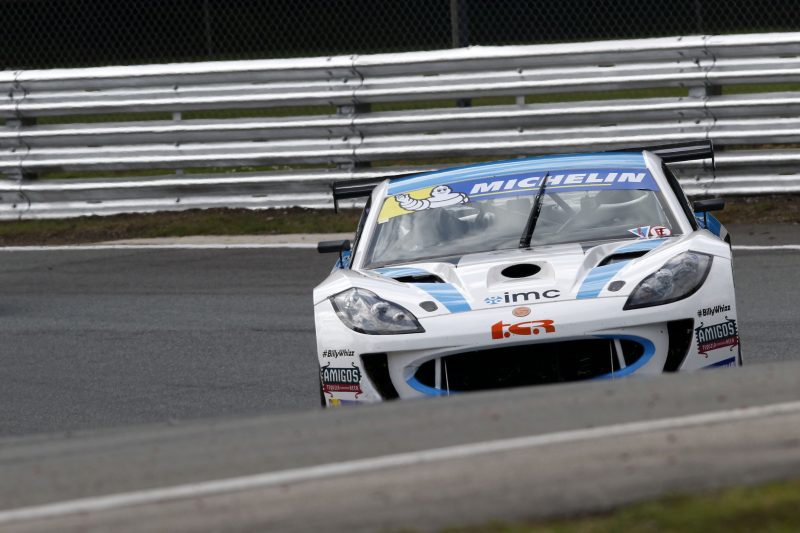 Overall this weekend can only be described as disappointing and incredibly frustrating! With both cars having shown so much pace in the early stages of the weekend, to then walk away with such relatively poor results is not what the team were looking for and will certainly be looking to bounce back strongly from this at the next round at Croft.

We now have a 3-week break before the next rounds up at the North Yorkshire circuit of Croft and the team will be working hard to ensure the cars are at their best for the meeting. One of the few positives that came out of this weekend was the limited damage to the cars with Ian just suffering a little cosmetic damage to the front end that will require a little attention from the body shop. With the Croft circuit being notoriously aggressive on tyres all the drivers will be given an additional 2 tyre allowance for the weekend and it is a circuit both drivers have done well at in the past so will be looking forward to meeting up with the team again over the weekend of 10th/11th June.