A four-week exposure at room temperature is sufficient for insect eradication. Anoxia kills insects more by dehydration than by suffocation. At very low oxygen concentrations, the spiracles (breathing openings) of the insect open so wide that the insect essentially desiccates. Dry and warm conditions can accelerate this effect.

Hat-making first emerged in Luton in the 1600s and had become synonymous with the town by the 18th century. Today, hats are still produced in the town, notably for the royal wedding in 2011. The history millinery industry is commemorated and celebrated at the Wardown Park Museum’s Women’s Hat Industry collection, home to original headwear dating from the 1600s to the present day. The collection of around 600 hats is in storage and can be viewed by prior arrangements with the museum.

On the morning of 24th May, Veronica Main, head curator of the Women’s Hat Industry collection, received the kind of phone call most heritage professionals dream of. A virtually unique specimen of a hat had been discovered, concealed in a 17th-century cottage in Essex. The owner of the cottage, who had discovered the hat in an interior wall during renovation work, had heard of the museum’s collection and wanted to donate the hat for research, and Mrs. Main was to be responsible for its cleaning, and subsequent conservation.

In Mrs. Main’s words, the find presented ‘an ethical and professional dilemma’. Firstly, the hat turned out to be very rare – one of only four such hats known of worldwide – a fact determined by its distinctive design and weaving technique, which was typical of hats produced in the Canary Islands in the early 18th century. There was the moral issue of whether it was right to publically display an artefact that had been deliberately concealed.

• Simple and inexpensive
• Appropriate for a wide variety of collection  materials
• Oxygen scavengers are not registered pesticides; no licensing is required

Happily, the fact that the hat was damaged and in an extremely fragile state made it a good candidate for research and restoration. This solved the moral problem, but before it could be added to the collection, it was essential that the hat be thoroughly but sensitively treated so it would not introduce pests and contaminants into the controlled environment where the rest of the collection was stored. Storing the variety of hats was already ‘a pest management environment control nightmare’, according to Mrs. Main, with a mix of materials including metal (which requires low humidity), fur (low temperatures), straw (alternating conditions) and wool (susceptible to moths). With limited resources, Mrs. Main needed a low-cost but effective solution to safely and thoroughly eradicate all insect pests prior to storage.

Hanwell specialists travelled to the Wardown Museum in Luton to meet with the curator and assess the problem. After consultation, we decided to deploy the AnoxiBug insect pest management system, a non-toxic, pesticide-free method of eradicating pest insects from virtually any material by removing oxygen from the air retained in a sealed, flexible enclosure Flexicube for a period sufficient to kill all stages of the organisms’ life cycle.

This insect pest management process involved placing the artifact in a sealed Flexicube, along with a container of AnoxiBug oxygen scavengers and a AnoxiBug Alert transmitter to monitor the oxygen level, and sealing the Flexicube using an electric iron. Within 24 hours, the transmitter indicated that the oxygen level had dropped to an acceptable level and within 30 days, all insects present had been eradicated. Once the dead pests had been removed, the hat could be safely researched, and ultimately, added to the museum’s existing collection.

“It never occurred to me that I could do an anoxic treatment, first because I thought only a conservator could, and secondly because of the expense.”

Situation
A valuable 18th-century hat discovered during a renovation needed to be thoroughly treated for pests before it could join a museum collection.
In the words of the curator, storing the hat was “a pest management environmental control nightmare”.

Solution
Hanwell Solutions deployed the AnoxiBug system, a sealed-tight aluminium container with oxygen scavenger sachets that eradicates all insect pests within one month. 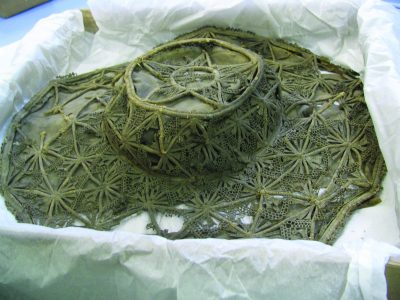