Dozens of institutional buildings constructed in the 1970s may be given a new lease of life thanks to an energy retrofit cladding system developed by Cork Institute of Technology, Kingspan and AMS. CIAN MOLLOY reports.

Under the 2010 European Performance of Buildings Directive (EPBD), all public buildings must be near-zero energy buildings (nZEB) by 2018, a tough task given that many of Ireland’s public buildings predate the building regulations and have inadequate insulation and use high-amounts of energy.

It’s no wonder that industry analysts are predicting that retrofitting Irish buildings to reduce their energy consumption is going to be a major growth area in the near future. The only upside is that the energy retrofit will provide valuable business to a construction industry that has now suffered five years of consecutive decline in activity.

So how will energy retrofit systems work and what kind of benefits can it bring? As a learning exercise for students, colleges and industry, Cork Institute of Technology (CIT) is currently working on a Zero2020Energy project that shows that the performance of existing facades can be easily and greatly improved.

With funding from the Department of Education and Science and research partners Kingspan and AMS, a new high-performance integrated window system has been developed for the existing facade at CIT’s buildings in Bishopstown, plus a new therm-strip curtain wall system capable of supporting the windows and a cladding system that is based on Kingspan’s pre-existing 125mm Benchmark system.

The difference in building performance is remarkable: before the energy retrofit the CIT buildings had an average U-value of 2.4W/ m2K and air infiltration levels were at 14.77m3/hr/m2; following the retrofit the average U-value has fallen to 0.36W/m2K and air infiltration is at 1.76 m3/hr/m2 at a pressure of 50Pa. Additionally, the retrofit has the potential to extend the lifespan of the buildings for at least another 30 years.

This pilot project involves only 290m2 of the 19,190m2 that the original buildings occupy but it is a test-bed for the redevelopment of the original site. Indeed the project is designed in a modular fashion to provide ‘plug and play’ capability for research in sustainable energy and in building energy systems. 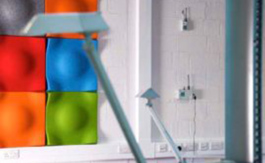 goes beyond that to include the college authorities whose aspiration is to create a zero energy campus by 2020. This project seeks to demonstrate than an increased capital investment in an energy retrofit can result in an estimated 75% reduction in operational energy consumption with the remainder being met by on-site renewable energy production.”

A key part of the project was the learning element to show undergraduate students, and post-graduate researchers, how the various energy efficiency and insulation measures performed in a real-world setting in comparison to how they were to behave in theoretical surmise. To achieve this CIT used an array of wireless sensors supplied by Instrument Technology Ltd (ITL) to monitor temperature, relative humidity and CO2 levels. “We provided a wireless environmental monitoring system from Hanwell Solutions, which comprises a number of these sensors, a base station and the software needed to record data, monitor it, analyse it and to have an alarm system where necessary,” said ITL’s technical director Peter Keane. “The sensors are measuring temperature, relative humidity and CO2 levels and are currently producing 1,000 data sets. 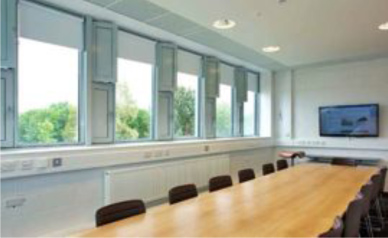 O’Sullivan points out that the sensors are designed to be used flexibly and repeatedly. He said: “Even the sensors placed within the buildings walls are easily accessible and removable so that they can be reused in the future as we tweak the system we have developed, or as we test a completely new retrofit solution or for an undergraduate or postgraduate to use in a sustainable energy or a building materials research project.”

The refurbished area has been decoupled from the existing heating system with the area is now heated by an air-to-water heat-pump located on the roof; because of the high-level of insulation the low-temperature hot water for the radiators is sufficiently warm for the occupants needs. This in marked contrast to the draughty, poorly-insulated original buildings, which are served by one radiator system operated on a time clock with no temperature controls in any of the blocks or in any individual space within the blocks.

O’Sullivan says that in time, as the energy retrofit is extended across the campus, the living laboratory will be able to incorporate other renewable energy sources such as photo voltaic panels, a micro combined heat and power (CHP) plant and vertical windturbines.

The refurbished buildings are home to two CIT campus companies, the Centre for Advanced Manufacturing and Management Systems (CAMMS) and the Medical Engineering Design and Innovation Center (MEDIC), and because this area is used for offices rather than for lecture halls involving large numbers of students ventilation and CO2 build-up is not as big an issue as it might otherwise be. Nevertheless, the energy retrofit does incorporate natural ventilation that is directly controlled by the occupants with the glazing system incorporating manually-adjustable, insulated louvres that provide single-side ventilation.

Over-heating in the summer has been reduced through the use of adjustable interstitial blinds to reduce glare and solar radiation. The BMS system also controls a separate set of louvres that allows purging of the structure with cold night air, thereby lowering the temperature of the exposed thermal masses in the refurbished spaces. This BMS system was installed by ACE Control Systems, designers and manufacturers of state-of-the-art HVAC and building energy management systems with offices in Cork, Dublin and London, where the company is gaining a lot of its business from Irish companies that have extended their operations into the UK as a result of the decline in construction activity in this country. ACE Control Systems director Noel Brennan said: “This particular BMS had to work with a lot of thirdparty interfaces and controls, so it had to be able to handle several different protocols. It is also fitted with an energy usage dashboard, which gives a very clear picture of how well the building is working.”

O’Sullivan said: “What we have founded is that continuing education is now a much more important part of energy conservation. Now that we are using far less energy heating the building, someone forgetting to switch of a desk lamp or a PC makes a real difference to the overall energy consumption figures!”

So far the project has been a great success. Kingspan Sales Director Ger Higgins said: “We’ve worked regularly with AMS over the years, in fact our relationship goes back a long way, developing integration of their window systems with our architectural panels. The Benchmark Karrier Panel System is a unique insulated panel that has been specifically designed and tested to support the Benchmark ranges of facades. The system provides excellent weather resistance, thermal, acoustic, fire and structural performance. The Benchmark Karrier Panel System is a metal-faced insulated panel that makes the building watertight, removing the façade from the critical path and enabling internal fit out to start sooner. The system easily incorporates a range of facades which includes ceramic granite (which was used on this building), natural clay tiles, natural and pre-finished metals, coloured and mirrored glass, cementitious boards and a range of natural and manufactured timber.

In addition to improving the performance of the building at CIT, I think the facade improves the look of the building architecturally, particularly the deeper reveals on the windows. We were delighted to work with a public body like CIT to develop a solution to reduce energy consumption and C02 emissions. Refurbishment is likely to be a more viable and more cost effective alternative to complete redevelopment in the short to medium term.”

AMS sales director Pat O’Hara describes the new energy retrofit product as ‘a pretty neat solution’. “Originally, they were looking at fixing the new facade to the existing wall of the building – but the facade was too heavy for that to work so we designed a curtain wall system that was capable of supporting the window and the cladding system. The facade was installed by Wesco aluminium from Ballineen in West Cork and that company has been extremely impressed at the ease at which the system goes together to give a modern, clean look, but also a top-of-the-range sustainable energy-efficient facade.”

Founded in 1990 as Architectural and Metal Systems, AMS currently employs 110 people and holds a number of patents covering innovations in window technology. Two years ago the company invested in a 1,800 tonne aluminium extrusion press and O’Hara says this has resulted in the company winning a lot of business overseas, particularly in the manufacture of signage and lighting.

The Department of Education and Science has taken a keen interest in the CIT Zero2020Energy project because not only can the pilot be extended across the whole of the CIT campus, it has the potential to be used at eight other IoTs where the building stock is near identical to that at CIT: ie they comprise four twostorey buildings constructed between 1970 and 1977.

These 36 buildings were constructed at a total cost of about £7.129m (c€9m), in 1969 prices, for what were then known as regional technical colleges (RTCs). Made from uninsulated precast concrete wall and roof panels, with 6mm clear single-glazing on the windows, these Institute of Technology buildings pre-date the building regulations and have ‘a very poorly performing thermal envelope with a very high level of air infiltration’. “They are cold and draughty in winter and overheat in the summer,” said project leader and CIT School of Mechanical and Process Engineering lecturer Paul O’Sullivan. “As a result, they are expensive to heat and you wouldn’t be allowed to build them to their current standard today. And it is not just these IoT buildings, there are plenty of secondary schools that were built before the building regulations came into force and which are performing poorly.

“The question is: what are you going to do with them? One option is to demolish and build again, but we have shown that retrofitting is an alternative, cheaper, solution. In terms of returnon- investment, the savings made in the reduction in energy consumption and CO2 emissions is probably not enough to justify the capital cost of the retrofit – but when you consider that you are prolonging the life of existing buildings and avoiding the cost of building new ones, then the cost is quite justifiable.”

“We provided a wireless environmental monitoring system from Hanwell Solutions, which comprises a number of these sensors, a base station and the software needed to record data, monitor it, analyse it and to have an alarm system where necessary.”